I took Kira home January 2013. She was 3 at the time. I did not start riding her till September that year. At that point we joined the NagNagNag trail riding club which is a walk only club. Starting September 2013, we went on one NNN ride a month. We only walked. I introduced trotting in January 2014. For three months, we walked and trotted everywhere. I intended doing endurance with her. As a kid growing up in South Africa, this is how we built our young horses up for endurance.

In April 2014 Kira started to develop saddle fit issues. At this point I got a saddle fitter out to evaluate. After many alterations, he managed to get the wool flocking in the saddle to a point where it fitted reasonably. During this process, he pointed out that her left side was over developed and the right side was atrophied.

The picture is one I took when I measured her up for her saddle in 2013. At this point she had never been ridden.

Notice in the picture how the right shoulder and ribs are falling away and the left shoulder is over-developed.

When I purchased this girl, I did not look for conformation or posture issues. Neither would I have recognised any signs of such issues. I fell in love with the girl and that was it.

In 2014 we started doing 40km training rides. I realised there were issues but I did not understand the implications thereof. Mid 2014 she started developing upright syndrome. That is where one foot is higher than the other. My hoof care provider advised me to get a bodyworker to try and sort out the problem with Kira’s shoulders.

I engaged a body worker and soon realised that I was only treating a symptom and not resolving the underlying issues. At this point I started to research various body work methodologies and investigated the possibility of learning to do the work myself.

That is how I came across April. Between a combination of April’s and a few other people’s Youtube footage I managed to get Kira through the season. She did well that season even though her body and front shoulders were not functioning correctly.

In November 2014, April and one of her instructors in training, Jean, came to Australia to teach three classes. I attended one held in Tamworth. April and Jean took me through Kira’s body and pointed out everything that has gone amiss. My doing the 40KM rides that year did not help. The more she worked the more she compensated and the worse her body was getting.

Even worse still was the situation in her head. April put her fingers underneath Kira’s zygoma bones and asked me which side was higher. I have to admit I was shocked. Kira had never done a pullback in my care and here she was standing with the one side significantly lower than the other.

I can’t begin to recount how many times I had gone out to the paddock to check if she had cranial issues. Every time I checked I could not see it until that day when April pointed it out to me.

I we set out to correcting all this. April and Jean did the first session of the body releases for Kira and then did a cranial decompression session. I was left with homework to continue her recovery. We started training for her second season in endurance. The plan was to start doing 80 KM rides in the 2015 season.

At the first training ride Kira vetted out lame. By now her bigger foot was significantly bigger than the other. And the entire hoof structure in both feet had started slipping forward. My hoof care provider was at her wits end trying to correct this. She continued to drop ribs and her hind end was not recovering. Later in the season she vetted out lame again. At this point I decided that it was time to change my approach. Up to now I was diligently doing the mayo fascia release techniques to keep her going. I was hoping to nurse her through the season and then give her a big break at the end.

In mid-2015 I stopped riding her all together. My hoof care provider sacked me, for which I will be forever grateful. I found a new hoof care provider with more experience who managed to bring Kira’s hoofs back to a more reasonable form. It meant a 4-weekly trim cycle for a while. I started back at the beginning with her body and cranial work. Once every section of her body had been through a myofascial release session or four, she was fed-up with me and started to become cranky at all my fiddling.

To stop myself from going out to the paddock and fiddle with her I organised for her to stay with a friend in Canberra, where she was left alone to graze her days away in a paddock. I visited often enough to ensure the recovery was on track. In September 2016 I brought her back. I thoroughly checked her body and was extremely happy. By this time, she was no longer cow hocked, her shoulders had equalled out and her new riding boots were the same size on all 4 feet. 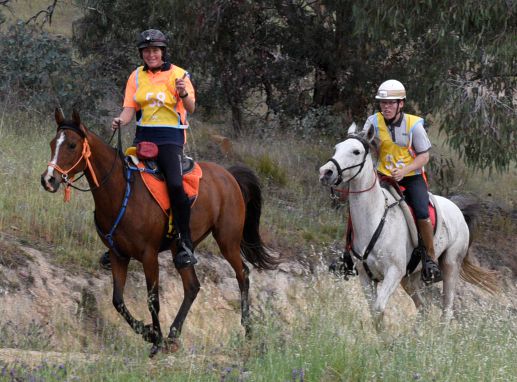 I started her back into light work doing a combination of activities to build strength. In January 2017 I started riding her again. We started preparing for the 2017 endurance season. I found a lightweight rider for her. She completed her first 80km ride earlier in the season with no issues and no signs of fatigue. She has now completed her three novice 80km rides and has successfully qualified as an endurance horse, with no gate or lameness issues.